THE CITY ON THE CLIFF

Blagaj is one of two Bosnian towns that were mentioned for the first time in history by the Byzantine emperor Porphyrogenitus in his famous manuscript from the 10th century - De Administrando Imperio (On the Governance of the Empire). History of Blagaj has never been adequately examined over the layers of time, unlike its archeological layers to which science has produced definitive answers. From these tests it is completely apparent that the medieval Blagaj was built on Roman foundations, Illyrian, and Roman retaining walls  and extensions with some brick, used for the first time as a building material and masonry stone layers as "fishbone". This timeline spans back to encompass the last 2,000 years!

Written records of historical value related to the rulers of the city on a cliff below which the Buna river springs, with its political story systematically follows only its medieval masters of the house Hranić, especially Vlatko Vukovic, Sandalj Hranić and his nephew – heir of the famous Herzog Stjepan Vukčić Kosača (1405 - 1466).

He succeeded his uncle, grand duke Sandalj Hranić, in his 30s, in 1435. Over his Hum land, forming a massive crescent floating at sea, with horns that touched Srebrenica in the east and Pset in the west, was the royal Bosnia. The earth would quake every time he was angry with the King, King Tomaš, to whom he gave his daughter Katarina as his wife. In addition to Katarina, he had another daughter Mara and three sons: Vladislav, Vlatko  and Stjepan aka Ahmed. Herzog died in his town Novi, in 1466, named after him, Herceg Novi.

The shape of the fortress on the cliff above the source of the Buna was formed on the ancient foundations of an independent governance of Mihajlo Višević, between 910 and 930 - a short time before it will be mentioned as a topographic point on the political map of the world by tzar Porphyrogenitus. As a military fortification, it completely disappeared by the arrival of Austro-Hungarian Empire in 1878.

After research in 1990 dr. A. Ratkovic recorded that the position of the Blagaj fort has not many similarities with the majority of Bosnian residential fortifications. He observes that "the most obvious difference between the constructed surface on which flattened land is used to the end above vertical cliffs, preventing an approach below the northern, southern and western rampart." That is why, he believes, the entrance to the fortress was built in the eastern and hardest wall of the court to which led a narrow horse trail from the direction of the east. This is "a path which led to a powerful, high and thick gate walls ". If one should attempt to break into the fortress, the lobby prevented and blocked intruders. Above the entrance gate a tower rises. Right from the entrance of the ruins are houses of arrested prisoners. In one of gloomily blackened stone one misfortunate man carved (perhaps with a fingernail): ''This writes Vrsan Kosarić, a prisoner who has no reason to rejoice.''

In the central area, stood the residence and court of house Kosača monarchs. Now, with collapsed stones, just a few remnants of the former are visible, a truncated stairwell. In the court was also one of the two tanks. Tradition says that there were drinking water springs on the Blagaj hill, so many authors from that fact drew the conclusion on the permanent level of water in a large tank, visible even  today! 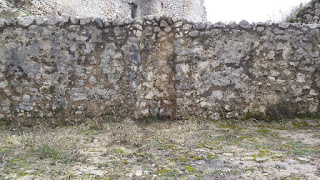 Along the southern part of the ramparts, long building was leaning, probably built for commercial purposes. The total could be around 15 houses and cottages. The eastern part of the complex were protected by three square towers with double ramparts, up to 14 metres high. The walls’ thickness ranged from 1.5 to 2 meters.
Mihrab dent in the wall, to the left of the main entrance, testifies of the existence of masjeed where prayers were performed by Fatih's vassals. This can be considered to be the first mosque in Herzegovina. It was built after the Turks conquered the city in 1466, the same ones in which the happy and powerful Herzog Šćepan left this deceptive, shifty and impermanent world. Returning from the fortress down the narrow horse trail to the suburb, one will see high martyrs headstones emerge from spring bushes, without incisions and letters, no names, only to witness how once upon a time someone like us lived in this world. Let the bygones be bygones. 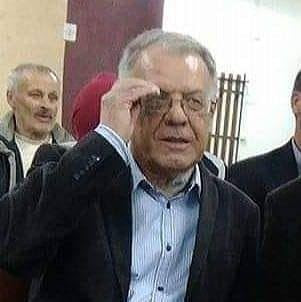